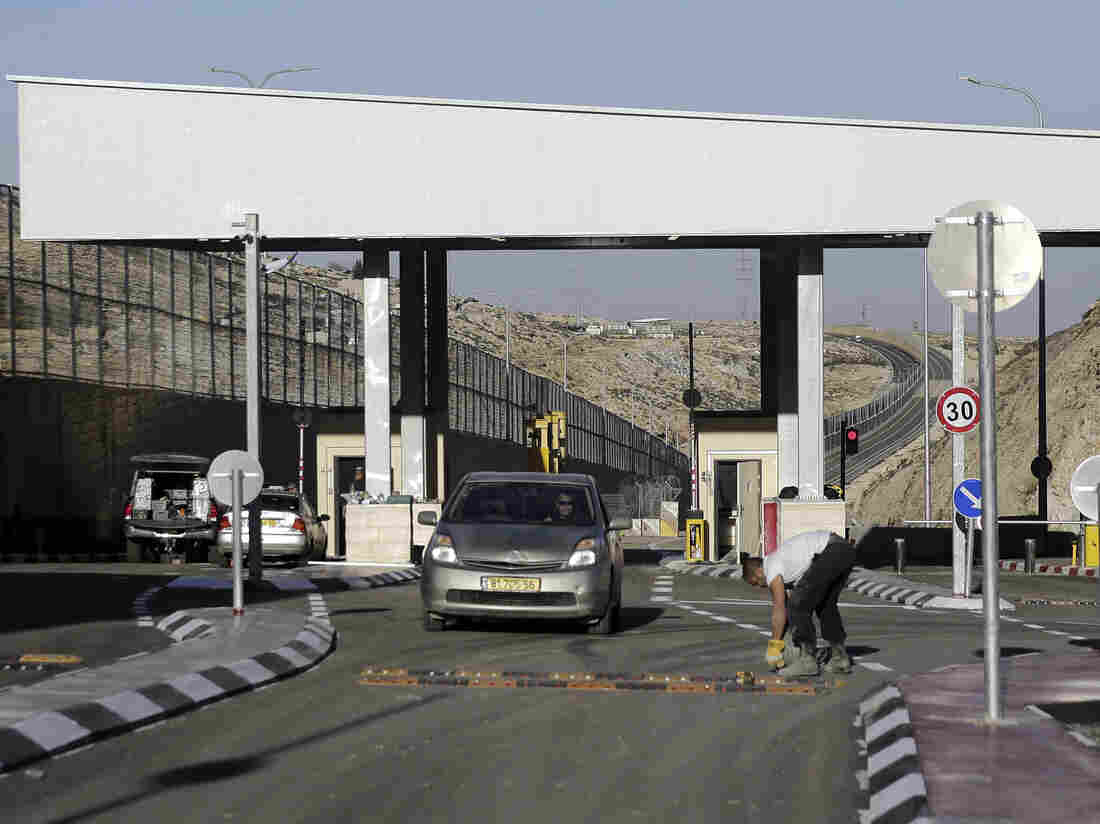 A checkpoint is seen on a West Bank highway near Jerusalem which critics have branded an "apartheid highway." The highway features a large concrete wall segregating Israeli and Palestinian traffic. Mahmoud Illean/AP hide caption 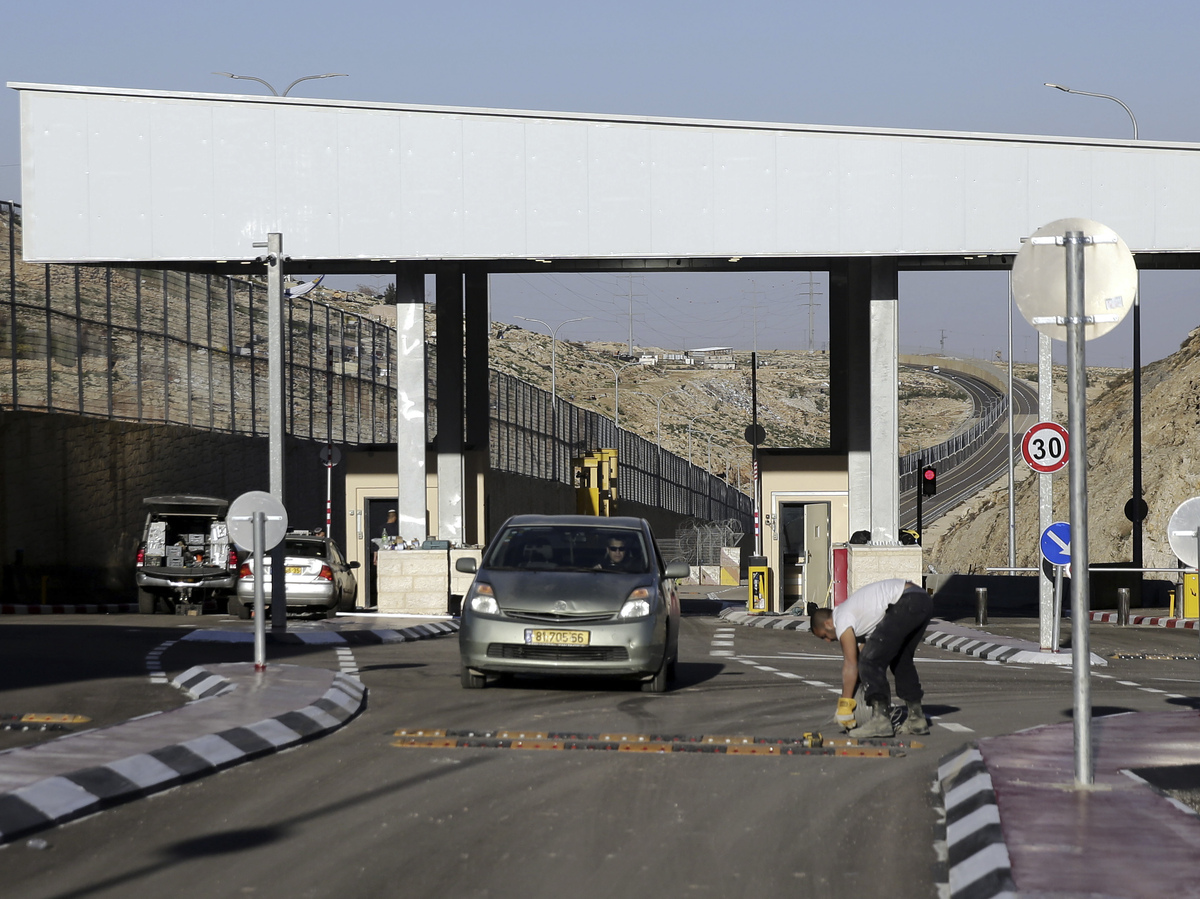 A checkpoint is seen on a West Bank highway near Jerusalem which critics have branded an "apartheid highway." The highway features a large concrete wall segregating Israeli and Palestinian traffic.

A prominent Israeli human rights group has intensified its criticism of the country's policies toward Palestinians, saying Israel pursues a nondemocratic "apartheid regime" and "Jewish supremacy" in both Israel and the Palestinian territories.

The report Tuesday by B'Tselem reflects a recent shift by critics within Israel, widening their focus beyond the country's half-century military occupation of Palestinian territories to policies stretching back to Israel's founding, and endorsing highly charged parallels to South Africa's former regime of white rule.

Many Israelis firmly reject the comparison. They boast of a vibrant Israeli democracy, say Palestinians have representation in their own semi-autonomous Palestinian Authority, and justify restrictions on Palestinians as necessary security measures in the absence of peace.

B'Tselem's director Hagai El-Ad, who is Jewish, said he hoped the report would inform the analysis of the incoming Biden administration as it considers how to steer U.S. policy, after the Trump administration sided with Israel and against Palestinian positions on the most sensitive aspects of the long-running conflict between the two peoples.

"I expect this will be part of a new chapter for fighting for justice in this place," El-Ad said.

B'Tselem, which has documented Israeli human rights abuses in Palestinian territories since 1989, said it now rejects the commonly held notion that Israel maintains two separate regimes side-by-side: a democracy inside Israel, where the country's 20% Palestinian Arab minority shares equal citizenship and rights with its Jewish majority, and a military occupation imposed on Palestinian non-citizens in territories captured in 1967 which Palestinians seek for an independent state.

The group's eight-page report instead asserts that one unequal system governs Israel, Gaza, the West Bank and East Jerusalem.

"One organizing principle lies at the base of a wide array of Israeli policies: advancing and perpetuating the supremacy of one group – Jews – over another – Palestinians," B'Tselem said in a statement Tuesday.

The Israeli government did not issue an immediate public response, but defenders of Israeli policy accused B'Tselem of radicalized anti-Israel propaganda.

"This is no longer the same NGO that once gained respect, even from critics, by championing human rights based on credible research. Today, it is a platform for demonizers," Gerald Steinberg of NGO Monitor, an Israeli watchdog of pro-Palestinian groups, said in a statement.

Do Palestinians In Israeli-Occupied West Bank Live Under Apartheid?

B'Tselem seeks to "fundamentally delegitimize Israel and call for its destruction - because one does not reform an Apartheid regime, one ends it," said Eugene Kontorovich of the Kohelet Policy Forum, a conservative Israeli think tank.

Another prominent Israeli advocate for Palestinian rights, lawyer Michael Sfard, issued a legal opinion last year that Israelis practice apartheid over Palestinians in the Israeli-occupied West Bank, but he stopped short of evaluating whether the same definition applied within Israel proper.

B'Tselem said Palestinian Arab citizens in Israel have more rights than non-citizens in the West Bank and Gaza but that they were second-class citizens to Jewish Israelis. It pointed to Israel's construction of hundreds of Jewish communities while building few communities for the country's Palestinian citizens; and laws that grant automatic Israeli citizenship to Jews around the world but exclude non-Jews, including Palestinians.

B'Tselem's criticisms of Israel's military occupation include travel restrictions placed on Palestinians, who require Israeli travel permits; and Palestinians' lack of voting rights in the Israeli political system which holds sway over their lives.

B'Tselem said it decided to embrace the apartheid terminology following the adoption in 2018 of Israel's Nation State Law, which defined Israel as a Jewish state and accorded Jews priority in areas ranging from the official use of Hebrew versus Arabic, to land development, to the government's discussion last year of potentially annexing occupied West Bank territory without extending voting rights to Palestinians living there, a move Israel says is possible.

"Israel is not a democracy that has a temporary occupation attached to it: it is one regime between the Jordan River to the Mediterranean Sea, and we must look at the full picture and see it for what it is: apartheid," El-Ad said.

The human rights group's name, B'Tselem, Hebrew for "In the Image," is taken from Genesis 1:27 which states that humanity was created in the image of God.