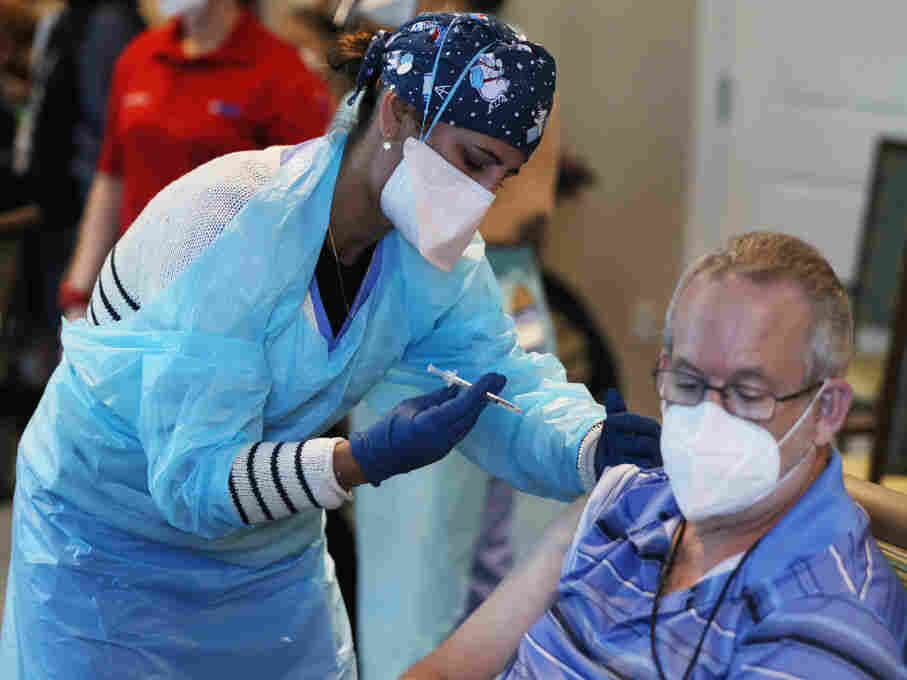 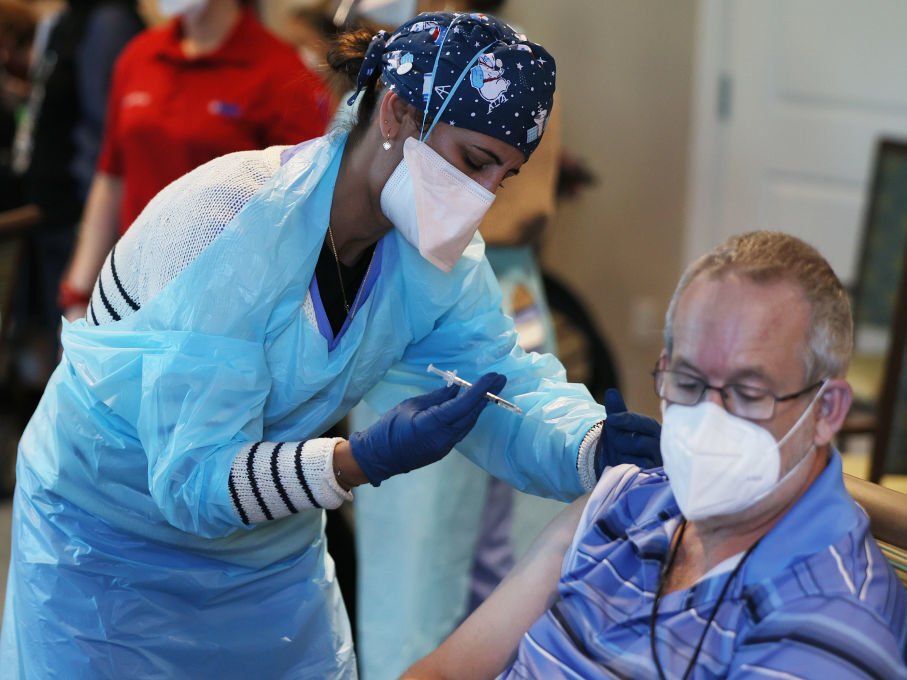 A health care worker with the Florida Department of Health administers a Pfizer-BioNtech COVID-19 vaccine at a retirement community in Pompano Beach, Fla. New Trump administration guidance arrived Tuesday, urging states to make all people over 65 eligible for the vaccine.

The Trump administration is making several big changes to its COVID-19 vaccine distribution strategy, officials announced Tuesday, in a bid to jump-start the rollout and get more Americans vaccinated quickly.

The first change is to call on states to expand immediately the pool of people eligible to receive vaccines to those 65 and older, and those with underlying health conditions that make them more susceptible to COVID-19.

"We're telling states today that they should open vaccinations to all of their most vulnerable people. That is the most effective way to save lives now," Health and Human Services Secretary Alex Azar said at a press briefing Tuesday.

"[This new allocation system] gives states a strong incentive to ensure doses are going to work, protecting people rather than sitting on shelves or in freezers," Azar said at the press briefing, "We need doses going to where they'll be administered quickly and where they'll protect the most vulnerable."

The administration is also urging states to expand vaccination to more venues, such as convention center "mega-sites," pharmacies and community health centers.

In addition, senior officials announced they would stop holding second doses of the vaccines in reserve and instead ship more doses to states right away.

"Because we now have a consistent pace of production, we can now ship all of the doses that had been held in physical reserve," Azar said. "We're now making the full reserve of doses we have available for order, [and] we are 100% committed to ensuring a second dose is available for every American who receives the first dose."

The change in releasing more of the previously reserved doses of vaccine preempts a policy change the Biden team announced last week. Officials from the Biden team declined to comment on Tuesday's policy announcements.

"I think it is appropriate to expand the groups, bring more people into the eligible pools," said Robert Wachter, chair of the University of San Francisco, California Department of Medicine. "When you hear people throwing out vaccine because they couldn't find anybody to give it to ... it's just a tragedy."

Wachter said, in tandem with opening up vaccine eligibility, details about scheduling to match supply with demand need to be worked out.

But other public health experts raised concerns that this rapid expansion and change in allocation method could throw more uncertainty into the mix for states.

Specifically, the expansion of eligibility to the vast, undefined population of people with underlying conditions could be problematic, said Claire Hannan, executive director of the Association of Immunization Managers. "This is not making things easier to get vaccine into arms. This is unquestionably making things harder, and will cause considerable confusion among the public."

The Trump administration's call to expand vaccine eligibility also deviates from previous Centers for Disease Control and Prevention guidance, which had recommended that front-line, essential workers and those over 75 be next in line, after health care workers and long-term care residents. Essential workers include groups such as grocery, agricultural and transportation workers who are at high risk of exposure.

While the decision for who is eligible to get a vaccine is up to states, recommendations from the federal government are influential.

"We are all wanting to vaccinate as many people as quickly as possible," said Grace Lee, a pediatrician at Stanford and a member of the CDC's vaccine advisory committee. "But we [need to] focus on both people at the highest risk of infection and the people at highest risk of severe disease in order to stop this pandemic."

The move to expand eligibility to over 65-year-olds by Trump administration officials "seems well-intentioned, but it is incredibly confusing to the public and disruptive to those trying to implement these programs to keep switching up eligibility every few days," noted Dr. Kelly Moore, deputy director of the nonprofit advocacy group the Immunization Action Coalition and a former immunization manager in Tennessee.

Hitching state allocations to the pace of vaccinations could make it much harder for states to schedule vaccine clinics, critics said.

"States have had issues all along, with not knowing how much [vaccine] they're going to get," Hannan said. "Saying that we're going to base the allocation on how much data is getting [reported] in the right place in the right hour — and that could change week to week. It's impossible to plan."

In the press conference, Trump administration officials presented these changes as a way to speed up distribution. However, they described the vaccine distribution process to date as "flawless" on their part and blamed the hitches in vaccine rollout on states.

"Some states' heavy-handed micromanagement of this process has stood in the way of vaccines reaching a broader swath of the vulnerable population more quickly," Azar said.

States and the federal government have traded accusations over who's responsible for the slow pace of vaccinations. Democratic governors and lawmakers have both urged the Trump administration in recent days to make changes to the distribution to improve the speed of the process.

The country is currently a labyrinth of different stages of rollout and different policies, said Jen Kates, director of global health and HIV policy at the Kaiser Family Foundation, which released an analysis on the subject this week.

"There are already cases where states have moved and said we are vaccinating 65 [and older], and they just do not have a vaccine to do it or they don't have vaccinators to do it," she said. "So there is a risk here if the systems that will get vaccines to actual arms are not in place or not sufficient that we're going to have a lot of people eligible and not able to get vaccine."

The danger, she added, is making people who are willing to get vaccinated so frustrated they give up.